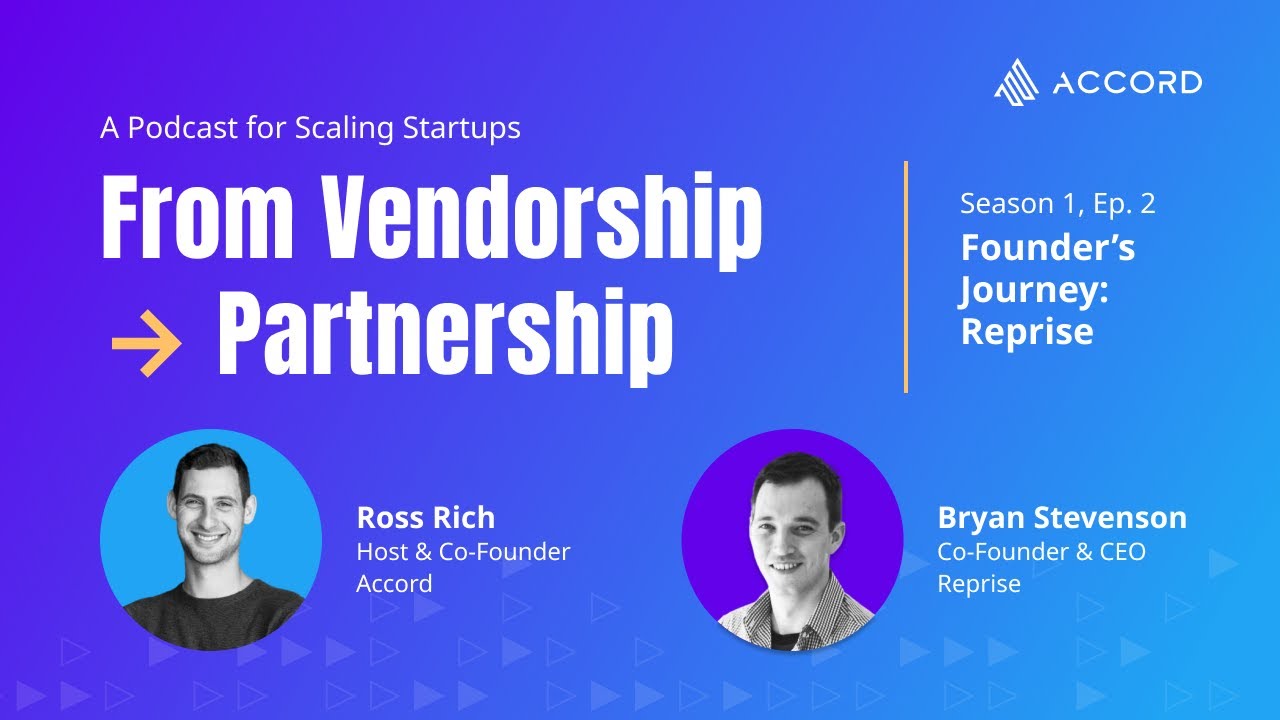 Recently, Bryan Stevenson, co-CEO of Reprise, was a guest on the From Vendorship to Partnership podcast. He talked about his biggest learnings from the founding of Reprise in 2021 to where we are today – it’s been an exciting journey!

He was a co-founder of Reprise and is now our co-CEO. Before Reprise, he was the CIO at Catalant. He has over two decades of experience as a software engineer, leader, and co-founder at several startups (and a non-traditional educational background too).

Why He Co-Founded Reprise

Reprise is the culmination of two decades of struggling with the same problem – there is a disconnect between the tools you need to sell your product and what you need to satisfy your customers.

Over and over in his career, Bryan has been asked to build a demo environment. The exact answer to that question has changed but has mostly been some version of: take a production environment, clone it, stick a new database under it, and there it is.

This method kind of works, but it has a lot of issues. It’s expensive to maintain, it’s a pain to change the story, and it breaks a lot because it’s mostly synthetic or anonymized data. Every single salesperson he’s ever worked with has a horror story of where the demo has gone down during the most critical point of a meeting.

But the purpose of a demo isn’t just showing people your actual product. People are not looking for proof that your software exists – they are looking for an introduction to the product so they can reach those aha moments with the product. And surprisingly often, the actual product is not the best way to get there. He’s been through this process four different times and decided there must be a better way, and that’s where Reprise comes from.

Bryan says that the luxury of founding startups a few times is that you can choose different objectives at the early stage. One of the most important at Reprise wasn’t about raising revenue – it was about getting that irresistible product fit.

Getting revenue early on isn’t that hard – you can just ask a few friends to buy it. But you really need customers who will be very honest with you about the market fit. So they got a few friends, ran them through the wringer, and asked them what they thought and if they’d pay for it. They didn’t go after customers in the traditional sense – instead they called them launch partners – and used it as a massive test to see if people actually needed what they were building.

The team spent very little time in the first year looking for customers. This let them figure out what were the salient parts of our product for the market, and helped us accelerate after the first eight months.

In SaaS sales, churn is seen as the worst enemy of everything – and it’s true. But by thinking of your very first customers as launch partners instead, you can churn them without damage if it turns out you promised them something that wasn’t or couldn’t be delivered.

By separating this out as an experimental phase, you give yourself more wiggle room while still working as hard as you can to make them successful.

There’s a very different emotional reaction to a launch from B2C to B2B. For B2B, it’s about asking prospects if you both foresee a future that looks a certain way. Usually the product is way more nascent in B2B as well.

You should focus on selling what you want the product to do, and see if you can bring people on your journey. Help other people to understand what your world looks like – it sounds dogmatic but it works. That’s the initial stage when you’re at version zero. Do people jump out of their seats when they hear about your vision? Because if not, the idea is probably not good enough.

The next stage is putting it in front of people and seeing how they engage with the product. Does it change how they do their job in some fundamental way? Is it a need, or just a nice-to-have? That’s the test of product market fit. The early stage is way more amorphous but with lots of experience, you can tell what a real need is.

Where Reprise Is Today

We’re growing super quick (including hiring a lot). And we’re continuing to evolve our product with lots of new features on the way. We’re building out the sales org – a lot of startups wait until it’s too late to do that.

It’s good to have a mature org evolving as the rest of the company does because it takes time to figure out how to get it right. It’s the same with marketing, you can’t do it too early (even if you’re just investing a little bit). That’s the primary focus at Reprise for the next six months.

Then we’re going to duplicate what we’ve been doing and keep going. That’s what growth looks like – growing everywhere and making sure we have the right people doing the right things. Essentially, that’s how a startup wins or loses.

Advice to His Younger Self

In 2002, Bryan and a friend founded a startup that was effectively DropBox. It was interesting and fun, and they launched. And they were making good salaries at their software engineering jobs at the time.

In their first month, they sold 500 subscriptions at $10 per month. (With no advertising at all – all viral sales.) They thought this wasn’t going to pay their salaries so they shut it down.

Bryan would probably go back and tell that version of himself that when you’re looking at success or failure, look at it against the milestones you’ve set for yourself. If you have the potential for a venture backable startup, your initial traction is a tool for leveraging equity for eventual acceleration. Then maybe he’d have thought, 500 paying subs (5000 MRR!) in the first month is pretty good. But they just didn’t see it at that point.

You can listen to the podcast or watch the full episode here: